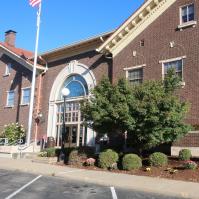 Marion Carnegie Library was opened to the public in 1916. It has undergone several renovations in the 104 years since, including a major expansion in 1997 that added 12,000 square feet. The library consists of three departments on different floors, it offers three meeting spaces, study rooms, printing and faxing services, access to databases, services and community events.

Marion Carnegie Library stands on the site of the former “Grandma Cline” residence. This property was acquired in 1914 for the sum of $5,003.17 from Sarelda Cline and her heirs. The building was constructed in 1915, with a grant of $18,000 from the Andrew Carnegie Foundation. Clifford Shopbell of Evansville, IN, designed the building, which was constructed by Robert Sparks of Marion. It was opened to the public on February 29, 1916 with 1,162 volumes and 680 borrowers. Marie Williams Roberts was the first librarian. Mark Woodley was the first president of the board of trustee. A mezzanine existed above the entrance to the library, until it was replaced by the present stairs, in the east entrance, in the late 1930s. The top floor was an attic until renovation on the south half made it the children’s area in 1962. In 1967, the children’s area expanded to include the north half of the top floor. In 1984, the Children’s Department was moved from the top floor to the lower level, so it would be accessible for the handicapped. In 2008 the top floor was remodeled into our current Teen Department.

Your Marion Carnegie Library card is good at more than 500 public libraries in the Illinois Heartland Library System. Please be aware that lending policies vary from library to library. Today’s collection now exceeds 118,000 items, there are over 9,000 registered borrowers and it averages more than 170,000 visitors each year. The library has an automated circulation system as well as multi-media workstations and Internet capability. There is a public meeting room with computer workstations. A full-service coffee bar is located on the main floor. Materials available for check-out include books, magazines, DVDs, audiobooks, educational kits and digital content. If our library does not have it, we will request it from other libraries in our system. The Marion Carnegie Library strives to offer the most relevant informational, educational, cultural and recreational programs and services to our community.